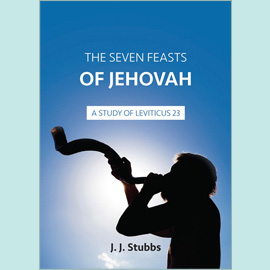 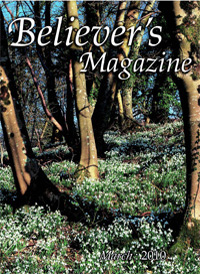 Why I Believe: That the Bible is the Word of God
W Stevely

Contemporary Issues: Passing on Responsibility - Getting Ready to Hand Over
D E West

Into All The World: Updates from Brazil (1)
Terry Blackman

Into All The World: Updates from Brazil (2)
John McCann

First, we note that Jonathan loved a man who won a battle that he himself could never win. Goliath presented himself for forty days before Israel with the challenge, "…give me a man, that we may fight together" (1 Sam 17.10). None, not even Jonathan, who had displayed great prowess in war, could rise to that challenge. Yet the shepherd from Bethlehem withstood the giant and brought him low. Believers have followed the same pathway. We have come to love the Man who, at Calvary, won a victory that we could never gain. Let us ensure that our response to Him is not mere words, but reflects the deep feeling of our heart, so that we can say, "Lord, thou knowest all things; thou knowest that I love thee" (Jn 21.17).

Second, the character of this love is clearly displayed by Jonathan’s actions. It is found first after the triumph over the Philistine when "the soul of Jonathan was knit with the soul of David, and Jonathan loved him" (1 Sam 18.1). At that time Jonathan stripped himself of his princely garments, his armoured coat, his sword, his bow, and his girdle and gave them to David. He did not delay to count the cost. He, the son of King Saul, recognised that David was the greater, and willingly acknowledged that fact. His was a selfless, self-effacing love. May we be prepared to lay everything at the feet of the Saviour and acknowledge that His triumph demands such a response!

When the enmity of Saul for David increased this did not diminish Jonathan’s love for his friend. "Jonathan Saul’s son delighted much in David" (1 Sam 19.2). The Psalmist writes of one whose delight is in the law of the Lord (Ps 1.2), that is in the Scriptures; the delight of Jonathan was in the one whom he loved. This was satisfying love as he was pleased to be in his presence and felt great favour towards him. May we find in the Lord that same satisfaction and delight as we seek to enjoy His presence. We are in a poor spiritual condition if we do not recognise His absence.

Despite the continuing hatred of Saul, Jonathan makes David a promise: "Whatsoever thy soul desireth, I will even do it for thee" (1 Sam 20.4). The king’s son took the place of a servant to David. This is submissive love, a love that was prepared to do whatever David desired. No explanation need be given for the request; it is an unconditional statement that came from the lips of David’s friend. If David would have it done, the deed would be carried out. Let us seek to submit to His Word with the same willingness.

But one final expression comes from the lips of David after the death of Jonathan and his father on the battlefield of Gilboa. With deep grief for the loss of Jonathan David cried, "Thy love to me was wonderful, passing the love of women" (2 Sam 1.26). This was surpassing love. It was marked by tender devotion, by loving care greater even than the gentle, loving care that is manifest in a woman’s love.

A third issue must be addressed. Jonathan remained in the court with his father. Does this not show a love that fell short? But must we not remember that there has only been one Man whose love never failed! It has been said of Jonathan that when David fled Jonathan’s life was in the palace but his heart was in the cave (see 1 Sam 22.1). He loved a man who was rejected, but who one day would reign. His love was pure, and constant.

Today our Lord is the rejected Christ, the One whose worth and power is still not acknowledged, Him whose presence is not desired in the present evil age. Let us seek to show that, contrary to what the world declares, we have found in Him that which satisfies us completely.